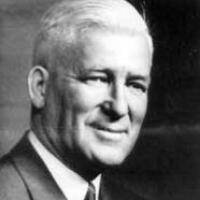 McDonald recalled, "About the first of March, 1945, President J. Reuben Clark of the First Presidency invited me to his office the following Saturday." McDonald "wondered all weekend about what in the sam hill he wanted me for." President McKay and President Clark had been highly impressed with McDonald's educational work, and President Grant approved their recommendation that McDonald be offered the presidency of BYU. McDonald's reaction to the appointment was mixed. While in California he had mentioned to Apostle George F. Richards that some day he would like to be President of Brigham Young University. But when the opportunity came, he hesitated. He explained his deficiencies to President Clark and then asked for a week to make a decision. With Clark's encouragement, he visited the Provo campus to talk extensively with the deans and members of the faculty. Finally McDonald told his wife, "We've been called by the First Presidency. Let's go and do it."

Though McDonald was not a university professor the Board preferred him to several prominent college educators as one who could give the University the leadership it needed at that time. The Board thought that as a former stake president and a man of mature faith he could bring a strong religious emphasis to the school.

President McDonald was a man of action in every facet of his administration. When he felt he was right, he was fearless in his efforts to realize his objectives. He demanded quality service from faculty and staff members and quality scholarship and character from the students who graduated from the University. His abrupt demands of the Board of Trustees sometimes created resistance because he was accustomed to a public school environment in which he as administrator made most of the decisions, and he had difficulty adjusting to a situation in which the Board of Trustees took an active part in the administration of the school. He had neither the patience of his predecessor nor the careful preparation for Board Meetings of his successor, but he served the University well, preserving the strengths of the school as he found them while leaving the mark of his own energy and imagination.

"May our Father in Heaven bless us with the spirit of this institution and help me to lead and direct the future of BYU with the same integrity that has characterized the leadership of those who have preceded me."—Howard S. McDonald