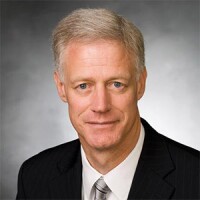 In describing Kevin J Worthen, 13th president of Brigham Young University, friends and colleagues use a variety of descriptors, some of them seemingly contradictory: brilliant yet unassuming, physically towering yet down-to-earth, visionary yet deferential. But when asked to introduce himself at the press conference following the March 2014 announcement of his new position, Worthen kept it simple: "I'm a BYU guy through and through."

It's an apt summation, as this institution has framed much of Worthen's life. From an early-childhood fascination with the university to degrees in political science and law to years as a professor and administrator, Worthen has been inspired by the mission and ideals of Brigham Young University.

Friends and family remember Worthen as a precocious child--an early reader who thrived in school. "He did very well at science classes; he did very well at math classes," remembers childhood friend J. Craig Smith, now an attorney in Salt Lake City. "He's just one of those guys [who's] smart in everything." And yet, he notes, "Kevin was not one who would show off how smart he was."

Worthen was involved in just about every opportunity offered him: he was on the debate team, wrote for the school newspaper, sang in the choir, and played cornet in the band. But more than anything, his teen years were defined by sports--especially basketball. "That was my life: I ate, slept, and played basketball," says Worthen, who was an all-state center as a high school senior and later a captain for the College of Eastern Utah (CEU) Eagles. "It was just rewarding: ... the camaraderie among the team, the competition, seeing hard work pay off."

Worthen has been an avid and vocal fan of Cougar sports since his childhood, when he'd tune in to games on the radio. At age 10, he attended his first basketball game in the Smith Fieldhouse, cheering on a squad that would win the National Invitational Tournament. "I had died and gone to heaven," he recalls of watching that game in person. "I couldn't imagine anything more fun." Half a century later, his feelings haven't changed much. With just a couple of exceptions, his family has made an annual pilgrimage to BYU's conference basketball tournament since 1993. Lifelong friend Brad King says it's illuminating to sit with Worthen at a game, as he seems to know everything about every player on both teams. "I didn't need to buy a program because he's a walking, talking program."

After serving a mission for The Church of Jesus Christ of Latter-day Saints to Monterrey, Mexico, Worthen dated Peggy Sealey while finishing an associate degree at CEU and working summers in a local coal mine. The two were married in 1978 soon after Worthen transferred to BYU for his bachelor's degree. They now have three children and five grandchildren.

The Hugh W. Colton Professor of Law, Worthen specializes in federal Indian law and the rights of indigenous peoples. He spent a year as a Fulbright Scholar studying the cultural and ethnic assimilation of Chile's native populations.

From 2004 to 2008, he served as dean of the Law School before being named BYU's advancement vice president, in which role he oversaw such areas as athletics, BYU Broadcasting, LDS Philanthropies, alumni, and communications. In this role, he was involved in several significant developments in athletics, including going independent in football, joining the West Coast Conference, and negotiating television contracts with ESPN.

Those who worked with him on these and other high-profile developments say he was not one to seek the limelight. Worthen "doesn't think he has all the answers and is really excited to gather people of expertise and capacity around him," says Tanise Chung-Hoon, managing director of LDS Philanthropies. "He says, 'This is your stewardship. How can I help you be successful?'"

Law School Dean James Rasband, formerly an associate dean to Worthen, calls him a collaborative, unintimidating leader. "People will feel like they have a friend and a listener, regardless of their station."

Over the years Worthen has applied those same leadership traits in a variety of positions in the Church, including bishop and stake president. He currently serves as an Area Seventy.

In his tenure as dean and vice president, and now as BYU president, Worthen has turned again and again to the mission of BYU, finding inspiration and motivating vision in the charge "to assist individuals in their quest for perfection and eternal life."

"There is a divine destiny at this school," Worthen declared in an April 2014 address, "and it [plays] out largely in the lives of our graduates and the influence that they have. ... To be part of an organization that has that kind of impact--an eternal impact on people's lives--it's a tremendous experience."