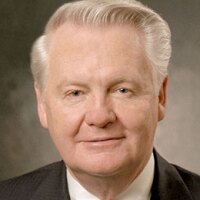 Born in Lehi and raised in American Fork, Utah, he earned a bachelor's degree in economics at the University of Utah in 1960 and went on to receive his doctorate in that subject from the Massachusetts Institute of Technology in 1965. President Bateman was a Danforth Fellow (1960-64) and Woodrow Wilson Fellow (1960-61). He was inducted into the Phi Kappa Phi and Phi Beta Kappa honor societies in 1960 at the University of Utah.

President Bateman headed his own consulting and capital management companies. Before rejoining the BYU faculty as a dean, he was an executive with Mars, Inc., in England and the United States (1971-1975).

Elder Bateman was called to serve in the Second Quorum of the Seventy in June of 1992. As part of that assignment, he was president of the Asia North Area. He has served the Church also as a missionary, bishop, stake high councilor, stake president and regional representative. He also helped lay the foundation for the Church's establishment in Ghana and Nigeria.

He was sustained as Presiding Bishop of The Church of Jesus Christ of Latter-day Saints on April 2, 1994. The First Presidency of the Church released him from that calling when they appointed him president of BYU. However, he continued to serve the Church as a General Authority, filling a position in the First Quorum of the Seventy.

The university's accomplishments during his presidency are summarized here.