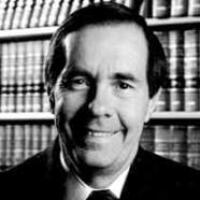 Before being named president of BYU, Rex Lee was a partner in the law firm of Sidley & Austin. He joined the firm June 1, 1985, after having served for four years as solicitor general of the United States.

President Lee was the founding dean of the J. Reuben Clark Law School at Brigham Young University from 1971-1975, and from 1975-1977 served as assistant attorney general, Civil Division, United States Department of Justice. He held the George Sutherland Chair of Law at Brigham Young University’s J. Reuben Clark Law School beginning in 1985. From that time, he taught Constitutional Law and maintained a private appellate practice, which was almost exclusively before the United States Supreme Court. He argued a total of 59 cases before the Court.

President Lee grew up in St. John's, Ariz. He received his B.A. degree in 1960 from Brigham Young University and his J.D. from the University of Chicago Law School in 1963. He also held five honorary Doctor of Law degrees.

During the 1963 term of the United States Supreme Court, Lee served as a law clerk to Supreme Court Justice Byron R. White.

President Lee served a mission for The Church of Jesus Christ of Latter-day Saints in Mexico from 1955 to 1958. He married the former Janet Griffin.

Lee pointed to five areas that he considered highlights of his tenure as president:

(1) The regularizing of procedures that had been long understood but never formalized, specifically academic freedom and requirements for employment.

(2) Timely graduation. This was an effort to streamline a BYU education while maintaining its quality in order to help students graduate sooner and thereby allow more students to enroll. The endeavor included negotiating transfer agreements with several junior colleges, revamping the general education program, reducing requirements in majors, providing special programs in mentoring and advisement for students, and other initiatives.

(3) Long-range planning. The Lee administration was active in identifying and tackling strategic issues that affected the university well into the 21st century.

(4) A capital campaign. The university announced April 4, 1996, a major fund-raising effort. Planning for this campaign to raise nearly $250 million began during Lee's tenure.

(5) Construction on campus.During Lee's tenure, BYU went through its most intense building period since that Wilkinson era in the 1960s. The Museum of Art was completed in 1993. The Benson Science Building was dedicated in October, 1995. There were major library additions at the law school and the Harold B. Lee Library. The Eyring Science Center underwent significant renovation. Student housing was renovated and expanded. A foreign language residential complex was completed. The Wilkinson Center, which houses student activities, was rebuilt.