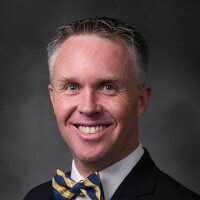 Steve has served as BYU’s assistant to the president and general counsel since 2018. At BYU, he oversees the Department of Risk Management and Safety, the Integrity and Compliance Office, and the Office of the General Counsel, and he also serves as a liaison for BYU on state and federal government relations matters. In addition to his roles at BYU, Steve is the general counsel for BYU–Hawaii, BYU–Idaho, and Ensign College.

After joining BYU as an attorney in the Office of the General Counsel in 2006, Steve worked on projects as diverse as negotiating the ESPN contract when BYU went independent in football and joined the West Coast Conference in other sports, working with Congress on federal legislation that allowed BYU to buy the Y on Y Mountain from the U.S. Forest Service, representing BYU in multiple court cases, including two cases he argued before the Utah Supreme Court, and negotiating the UTA contract that provides free mass transit to all BYU students, personnel, and their families.