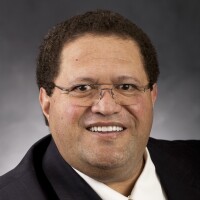 Assistant to the President, Student Success and Inclusion
Curriculum Vitae

Vernon Heperi is the Brigham Young University assistant to the president for student success and inclusion. He is a native Maori from New Zealand and is married to a Mohawk Native American Indian from the Akwesasne Reservation in upstate New York. They are the parents of four children.

Heperi served as a proselyting missionary in England, for the Church of Jesus Christ of Latter-day Saints. He has also occupied a number of administrative roles at BYU including associate dean of students (2002-2003), dean of students (2003-2006), and associate vice president for student life and dean of students. He served in the last position for 12 years prior to accepting the appointment he currently occupies.

Heperi completed his undergraduate work at BYU in communications (1991), and received a Master’s degree from Utah State University in psychology (1994). Soon after returning to BYU, Heperi earned doctoral degree in educational leadership (2002).

Heperi’s prior work experience includes service as the BYU director of the Ethnic Student Services Office (1996- 2002), Snow College director of student activities and high school counseling with the Federal Trio Programs (1996-2002), where he developed programs for at-risk students in rural communities.