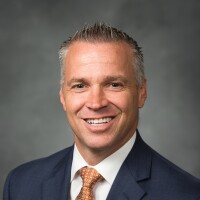 C. Shane Reese was appointed as the Academic Vice President on June 3, 2019. Prior to his appointment, he served as the dean of the BYU College of Physical and Mathematical Sciences from 2017–2019. He is a member of the Department of Statistics faculty and an elected fellow of the American Statistical Association.

Reese’s research has centered on Bayesian hierarchical models and Bayesian optimal experimental designs. He has created statistical models addressing a range of issues from predicting the power of solar storms to determining the safest method for destroying chemical weapons to assessing climate impact on glaciers in high mountain Asia and Antarctica. His work has also been used by the U.S. Olympic volleyball team as well as the NFL’s Philadelphia Eagles.

Reese joined the BYU statistics faculty in 2001. He received BYU’s Young Scholar Award in 2004 and the BYU Karl G. Maser Excellence in Teaching Award in 2010. Reese was the Melvin W. Carter Professor of Statistics from 2012-2017. Prior to entering academia, he worked in the Computer, Computational, and Statistical Sciences Division of Los Alamos National Laboratory.